Homeanti-TrumpYou Are Not Safe
anti-Trump

You Are Not Safe 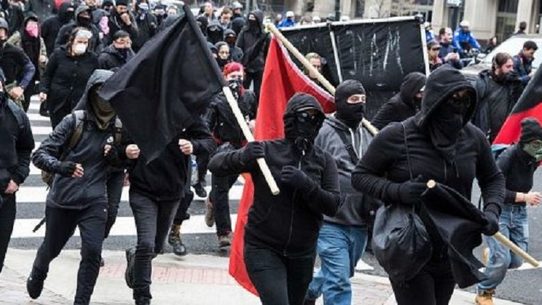 Those four chilling words were posted on social media the day after a mob of radical leftists descended on a Washington eatery and accosted both Sen. Cruz and his wife, while they were having dinner – ultimately driving out the Texas lawmaker and his wife from the restaurant.

The ugly incident was captured on video as a propaganda message, warning other Republican lawmakers that things are about to get nasty if they vote to confirm Judge Kavanaugh to the Supreme Court.

Moreover, if Cruz and other Republican lawmakers didn’t get the message Monday evening, the Washington D.C. chapter of Antifa on Tuesday sent out another message to the Texas Republican lawmaker – and this one was a lot more ominous.

The initial disturbance in the restaurant was first regarded as a spontaneous demonstration by a little known group calling themselves “Smash Racism DC.” However, upon closer examination, the group is actually a spin-off to the violence prone anarchist group ANTIFA.

A recording of the incident within the restaurant actually illustrates just how well choreographed these organizations are – And how serious and potentially dangerous to lawmakers this radical organization has become.

“No, you can’t eat in peace; your politics are an attack on all of us You’re votes are a death wish. Your votes are hate crimes. Tonight Senator Ted Cruz arrived at Fiola, an upscale restaurant mere steps from the White House, to enjoy a hearty Italian dinner. He could have dined on a lavish four course meal for only $145 while millions of Americans struggle to buy groceries. He might have sampled from the top shelf wine list as migrant children languish in cages.”

The chilling message continued, “He’d have laughed with his wife while women and members of the LGBTQ community collectively gasp in horror as Senator Cruz pushes forward on Bret Kavanaugh’s Supreme Court nomination. At least he could have had activists not interrupted his evening just as he was being seated,” the Antifa group continued. “Instead, activists from Smash Racism DC, Resist This, DC IWW, members of DC Democratic Socialists of America, Anarchists, women, sexual assault survivors, and members of the LGBTQ community interrupted Ted Cruz’s peaceful meal.”

ANTIFA wasn’t satisfied with simply harassing Sen. Cruz at a restaurant, they wanted to instill fear within him by reminding him what they’re capable of doing if pushed.

The record is clear: these are violent thugs, who’ve demonstrated time-and-again just how violent they are. We’ve witnessed their violence within countless past demonstrations. Clad entirely in black, with their faces covered to hide their identity, these marauding misfits attack in packs – beating victims senseless with sticks, bats and bottles.

And on Tuesday this violent gang sent a blunt warning.

“This is a message to Ted Cruz, Bret [sic] Kavanaugh, Donald Trump and the rest of the racist, sexist, trans-phobic, and homophobic right-wing scum: You are not safe. We will find you. We will expose you. We will take from you the peace you have taken from so many others.”

The dire threat has since been removed from the internet, however the threat is real. Even ANTIFA realized they needed to remove the evidence before law enforcement got wind of the message.

However, nothing actually disappears from the internet, and apparently someone on the senator’s staff had the good sense of preserving the evidence for investigators.

Wikipedia Has Been Taken Over