Europe can be so revolting 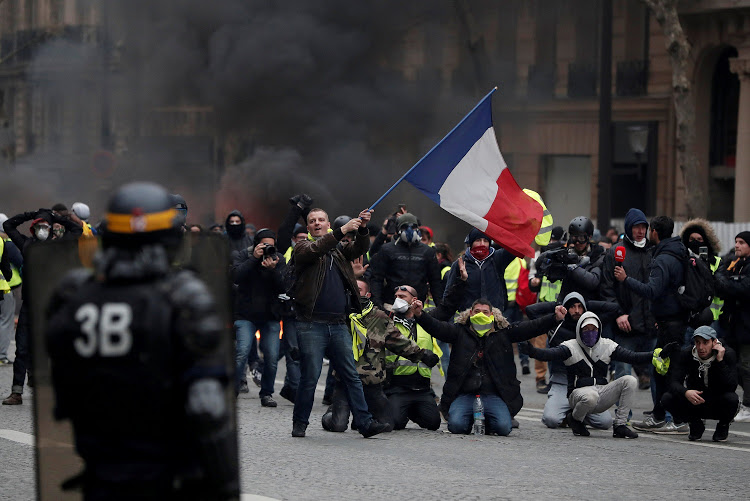 Working class Europeans of every political persuasion and age are in revolt. From France to Sweden, the U.K. to Germany, Belgium to the Netherlands, everyday people are taking to the streets to voice their discontent with the present neoliberal system – a corrupt system which has failed them. Similar protests have surfaced in Greece, Serbia, Croatia and to a lesser extent Hungary.

Let us begin in France, at the epicenter of this populist revolt against the static,out-of-touch, plutocratic, pro-globalization, pro-EU, banking, media and political elite. Five weeks ago, on November 17th, a hike in fuel taxes served as the catalyst which initially sparked what’s being called ‘Mouvement des gilents jaunes’ or the Yellow Vest Movement. This was the last straw for the tired, overworked, overtaxed, and struggling French working and middle classes.

In the five weeks since the initial protest,Macron, in an effort to quell the month-long revolt, suspended the proposed fuel tax hike, and announced increases in the minimum wage and a tax cut for most pensioners. Despite these concessions, today, thousands of Yellow Vest protestors, old and young, are still out protesting.

So, what exactly are they calling for?

Until just recently, the demands of the Yellow Vest Movement were not entirely clear. That changed three days ago when the Official Charter of the Yellow Vests: 25 Demands to End the Crisis was drafted. The 25 demands are organized into four categories: Economy/Work, Politics, Health and Environment, and Geopolitical.

Alain De Benoist, a prominent French philosopher, academic and political intellectual has described the Yellow Vest Movement as ‘populism in its purest form’. The symbol of the yellow vest embodies this expression of pure populism. But how?

In France, it is obligatory to carry a yellow vest in your car, so practically everyone owns one. There is perhaps no better uniform or article of clothing that can be used to symbolize the worker or proletariat, and thus the populist movement. Think about it. Who are the ones building our bridges,buildings and skyscrapers? Who are the ones fixing the roads we drive on? What about firefighters, airport workers or those who are fixing our telephone and electricity lines? Every one of these essential workers wears a high visibility yellow vest.

And just how have these essential yellow vest worn workers been treated by the ruling neoliberal globalist elite? Aside from being left behind economically, many have been written off as uneducated rednecks, racists,bigots, sexists, homophobic and deplorable. In truth, the neoliberal globalist elite, or the ‘new elite’, absolutely detest those who fall into this sector of society.

Russian philosopher,academic and political analyst, Aleksandr Dugin, echoes this sentiment. He writes, “According to these ‘new elites’, the people and society, in their current state, have no place in this world. Therefore, the typical representative of the ‘new elite’ Hillary Clinton, upset by the success of the right-wing populist Trump, openly insulted ordinary Americans – deplorable, which in meaning means “insignificance.” ‘Deplorable’ have chosen Trump – not because they loved him, but to respond to the ‘globalist witch’ Clinton. The populism of the “yellow vests” – can be viewed as a retaliatory uprising of the people against the elites, who have completely lost their connection with society. The elites have built their own world in which double standards, norms of political correctness, liberal demagogy reign.”

Without a doubt, the concerns which lie at the heart of the yellow vest protests transcend national boundaries. The yellow vests are now being used across Europe to symbolize the people’s discontent with the out-of-touch, corrupt, metropolitan elite.  It’s no surprise that similar protests have sprung up all over Europe.

Last week, in London, thousands of pro-Brexit protestors in yellow vests took to the street to express their dissatisfaction with their Prime Minister,Theresa May’s attempt to sabotage the Brexit deal. As it stands, the current ‘Brexit deal’ would mean Britain would remain in the single market and customs union. The country would also be required to obey all current and new EU laws, comply with budget commitments and comply with ECJ judicial oversight. Lastly, and perhaps most importantly, the current deal would  allow the continuation of free movement from other EU states into the country – something Britons clearly do not want. In short, May’s Brexit deal goes against everything Britons voted for in 2016.

Yellow Vest protests have also been seen in Stockholm, Sweden, where demonstrators gathered to peacefully protest the U.N. Migration Pact.

In Brussels, Belgium large amounts of yellow vest demonstrators gathered voice their discontent with current living conditions as well as the U.N. Migration Pact. Protestors have called for the resignation of the Prime Minister. Belgians pay the highest state taxes on diesel in the whole of Europe. Following Belgian yellow vest protestors taking to the streets, Belgian ministers announced fuel prices would not be index-linked from 2019. Despite this concession, and as they did in France, protests have continued.

Although substantially smaller in scope, the cities of Rotterdam and The Hague, in the Netherlands, have also seen yellow vest protests spring up over general dissatisfaction toward the governments’ economic measures. People are simply struggling each month to make ends meet.

On Friday, the 15th of December, thousands of protest took to the streets of the Serbian capital of Belgrade to call for resignation of President Aleksandar Vucic. A substantial contingent of protestors were seen wearing yellow vests.

In the last few days, protests in the Hungarian capital of Budapest erupted over newly enacted labor laws that would allow employers to demand up to 400 hours of overtime from workers. Having been present at the demonstrations in Budapest, I can say that the political complexion of the mass of people protesting did not show much resemblance to protests in France, Belgium, Sweden and the Netherlands. I only saw but a few demonstrators wearing yellow vests. Furthermore, and unlike the yellow vest protests in Western Europe, the aura of the protests in Hungary was seemingly more left wing, pro-EU,and pro-globalization.

Croatia and Canada have also seen there own smaller yellow vest demonstrations pop up in metropolitan areas.

While it is true that the people from different European nations were originally drawn to the streets for slightly different reasons, there does seem to be a common undercurrent that is driving the majority of these demonstrations – namely discontent over globalist neoliberal policies and governments.

Can this European Spring, which is only in its infancy, result in any lasting change, and if so, can the same spirit of revolution and change spread to other parts of the world? For more info, please check out  Occidental Defense