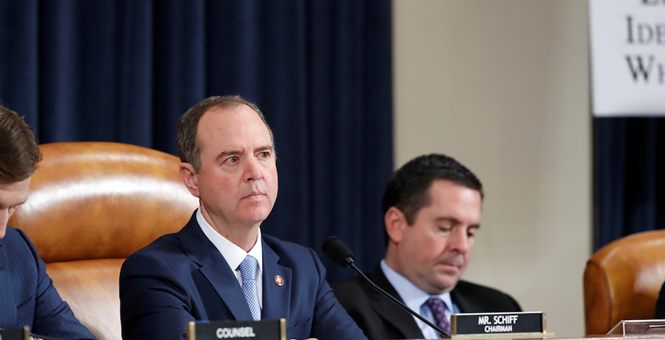 On Saturday two isolated events, thousands of miles apart reacted to the same overarching issue of impeachment, with almost a similar emotional outcome.

In California, on Saturday night at a town hall meeting at the Glendale Central Library chaos suddenly erupted when Congressmen Adam Schiff took to the podium and began speaking.

The event sponsored by the Armenian National Committee of America — Western Region, invited Schiff to speak on behalf of a measure passed by the House in October regarding the Armenian genocide.

Schiff who is the chairman of the House Intelligence Committee initially ignored them, reading from a prepared speech concerning the resolution he co-sponsored, which was overwhelmingly passed by a 405 to 11 vote.

However, on this night, the specter of impeachment he helped create hung heavy within the audience, and within moments the assembled gathering erupted with shouts of “LIAR!”

One individual suddenly rose from his seat pointing directly at Schiff, who seemed genuinely stunned announcing that the Californian lawmaker will forever be known as “committing treason,” for spearheading the impeachment folly.

The 9-minute video clip captures the bedlam within the library, as both pro-Schiff and pro-Trump partisans squared-off.

In one scary moment, a Trump supporter suddenly unfurls a red and blue Trump flag, at which point a Schiff supporter attempts to wrestle the flag away, as both individuals fall to the ground. Another Trump supporter holds up another sign proclaiming “re-elect Trump.”

The pro-Schiff crowd then begins chanting “Adam! Adam! Adam” surrounding the few Trump supports, pushing and shoving them to the exit door, yelling “leave” or “get out!”

Thankfully three local Glendale police officers were on duty, to restore some order and help the besieged Trump supporters out of the facility, with just a few bumps and brushes.

Approximately three thousand miles away, in the Garden State, the issue of impeachment was also being played out. However in a much more somber way, as House Democratic freshman Rep. Jeff Van Drew announced earlier within the impeachment process, that he would be voting “no.”

Nevertheless on Friday Van Drew stunned the Party, when he suddenly announced that he was no longer a Democrat, which was shocking enough, however, moments later he announced he was joining the Republican Party, and Saturday morning President Trump took to Twitter to congratulate the 66-year-old legislator.

According to a GOP official familiar with the conversations, the lawmaker had discussed switching parties in a meeting with Trump at the White House on Friday, an administration official said Saturday.

Van Drew won his southern New Jersey district by 8% last year, but Trump carried it by 5 points in 2016 and Van Drew was considered one of the more vulnerable House Democrats going into next November’s congressional elections.

On Thursday, one day before Van Drew announced his defection to the Republican Party, he said, “It doesn’t mean that I agree with everything the President may have said or done. It means that I don’t believe that these are impeachable offenses.”

There are currently 31 Democrats (including Van Drew), who flipped House seats within Republican strongholds; on a promise, they would work with the President, if elected. Their constituents “FOOLISHLY” took a huge risk, perhaps believing that shared responsibilities, would make for better governance, and in most instances, they would most likely be correct. However as witnessed, Democrats aren’t interested in governance, they’re only interested in nullifying the 2016 election.