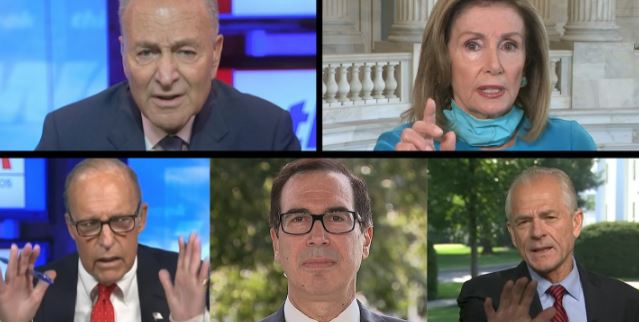 President Donald Trump’s new executive actions to disburse coronavirus relief without Congress sparked confusion and frustration Sunday among businesses, Democrats and state officials, some of whom lamented the moves would not deliver the necessary relief to cash-strapped Americans.

Trump’s directives were aimed at offering new unemployment benefits, protecting renters from eviction and postponing the payment of a federal tax. But an array of economists and lawmakers depicted these policies as incomplete, unworkable or legally questionable – raising the prospect that the president’s attempt to boost the economy may have a muted impact.

One of the orders allows employees making less than $104,000 to delay until January payment of a payroll tax that funds Social Security and Medicare. Trump added that he would try to change federal rules next year to make the deferred payments into a permanent tax cut – but only if he is reelected.

The tax typically is taken out of paychecks by employers. And businesses, payment processors and economists signaled Sunday, in the absence of a guarantee, that the payroll taxes actually will be absolved, businesses would be unlikely to alter worker paychecks.

“It’s a little bit of a leap of faith on an employer’s part,” said Pete Isberg, the vice president of government affairs for ADP, which processes payments for 40 million workers and 800,000 businesses.

Unable to swing a deal with Democrats, Trump resorted to executive actions as concerns in Washington intensified about the economic distress – and the political fallout – caused by the pandemic.

But Trump’s attempts to circumvent the partisan logjam on Capitol Hill instead may be illustrating the limits of executive power – and the costs that can come from invoking it. In this case, a more long-lasting legislative solution may have been delayed with the White House deciding to act on its own, said Daniel Hemel, a law professor at the University of Chicago in an interview.

“It’s a Band-Aid on an open wound,” he said Sunday. Trump “can do it, legally, but to provide real lasting relief he needs help from Congress – and if anything, he made that less likely yesterday. Most of us won’t see more money in our paychecks, and the millions of families on unemployment will still be in crisis come September.”

The coronavirus pandemic has had a devastating impact on the U.S. economy, forcing many businesses to close and lay off workers. Certain sectors, particularly travel, hospitality and retail, have been hit particularly hard. The country has more than 30 million Americans collecting unemployment insurance and has not rehired half the workers who had lost jobs by the end of April, a fact White House officials acknowledged Sunday.

Democrats pounced on the confusion from Trump’s executive directives, arguing that the White House should resume negotiations on a broader relief package. Those talks had collapsed last week after both sides dug in on what they believed the package should entail and how much it should cost.

The stalemate resulted in the expiration of a critical economic lifeline to millions of Americans – an extra $600 each week in unemployment benefits that Congress approved in March.

In response to the expiring aid, Trump on Saturday signed an order that would offer $400 a week in federal unemployment benefits. To pay for the program, the president said he would tap $44 billion in federal funds that are allocated for natural disaster relief such as a hurricane or wildfire.

But states would have to contribute $100 a week to each worker’s check, with the federal government putting up the rest. Beyond the legal questions surrounding the maneuver, many states are facing severe budget deficits as they fight the coronavirus, and several economists and lawmakers said governors may be unlikely to sign onto the program.

States are asking the federal government to offer as much as $1 trillion in new aid to cover budget gaps. Asked whether Ohio could afford the new unemployment insurance expense, Republican Gov. Mike DeWine replied on CNN: “The answer is, I don’t know yet.”

On “Fox News Sunday,” Treasury Secretary Steven Mnuchin suggested that the administration could be flexible on the state contribution, saying: “The 25% from the states – they can either take that out of the money we’ve already given them or the president can waive that.”

According to the president’s directive, the aid should run through Dec. 6 or until funding runs out. But $44 billion would cover less than five weeks of payments for the ranks of the 30 million Americans who are currently unemployed, several economists noted.

But top administration officials on Sunday appeared confused about when the first checks might be paid. Mnuchin said the jobless benefits could be available “immediately,” but White House economic adviser Larry Kudlow said on CNN that the payments could take a couple of weeks.

Even if state governments sign onto the program, the jobless benefits might be out of reach for Americans in greatest need: Only out-of-work Americans receiving more than $100 a week in state unemployment insurance are eligible for the federal aid. That means those at the bottom of the income distribution – particularly workers who rely on tips and the self-employed – could see no additional federal benefit at all, said Andy Stettner, an unemployment insurance expert at the Century Foundation.

The White House rejected the accusation that its policies would disproportionately hurt the poorest Americans. A spokesman added that the $100-a-week limit was aimed at curbing fraud and making sure those who are receiving the federal benefit have already qualified for an unemployment program. “It’s utter nonsense to suggest that the Trump administration is somehow targeting poor people,” said Judd Deere, a White House spokesman. “The president is acting where the Democrats are putting people’s futures at risk.”

One of Trump’s other executive orders was aimed at minimizing evictions and foreclosures. But the order does not reinstate a federal eviction moratorium that expired last month. Instead, it calls on the Department of Health and Human Services and the Centers for Disease Control and Prevention to “consider” whether it is necessary to temporarily halt evictions. The action fell short of what housing advocates said is needed to keep millions of Americans in their homes.

Trump’s directive on the payroll tax break came after the White House pressed Congress for months to include the tax cut as part of a new congressional coronavirus relief package. But the idea repeatedly ran into political resistance, including among Republicans, who questioned at times whether it would create new fiscal headaches for Social Security and the government’s rapidly increasing deficit.

“This will mean bigger paychecks for working families,” he said at a news conference in Bedminster, N.J.

But experts said businesses are unlikely to begin deferring tax payments or boosting workers’ checks by next month – or, perhaps, at all. As they await additional guidance from the Trump administration, many are bracing for the gargantuan task of rethinking their payment systems, said Mike Trabold, the director of compliance at Paychex, a payment-processing company. He added that federal law also holds companies responsible if the taxes are not properly paid to the U.S. Treasury on time.

“I think what most employers are going to do is not pass this on to their employees,” added Josh Bivens, the director of research at the left-leaning Economic Policy Institute. “They’re not going to give money to the worker because the government is at some point going to come back for it.”

Instead, the costs of Trump’s political gambit could prove great, thrusting the hot-button issue of Social Security and the future of federal entitlement programs into the election mainstream. Retirement benefits historically are sacrosanct in American politics, and Trump’s mere suggestion he may seek permanent changes to the way they are financed raised immediate concerns that it could lead to lasting changes to the monthly checks paid to seniors.

The AARP, for one, criticized Trump in a statement for actions it said “exacerbates people’s already-heightened fears and concerns” about their financial futures.

On Saturday, Trump tried to use the payroll tax announcement to mount an attack on Democratic presidential candidate Joe Biden, arguing that the former vice president and his party would end the deferral, “raising everyone’s taxes and taking this away.” Biden countered by accusing Trump of trying to “undermine the entire financial footing of Social Security,” with the effect of putting Americans’ benefits “in doubt.”

“I do think the more permanent change, advocating for some kind of permanent reduction or elimination of part or all of the payroll tax, would likely be tough political ground for the president to be on,” added Shai Akabas, the director of economic policy at the Bipartisan Policy Center.

House Speaker Nancy Pelosi, D-Calif., on Sunday insisted that she and Schumer had made significant concessions to get a deal over the course of two weeks of lengthy meetings with Mnuchin and White House Chief of Staff Mark Meadows.

“We have to reach an agreement,” Pelosi said on “Fox News Sunday.” “Children are food-insecure, families are at risk of being evicted, the virus is moving like a freight train.”

Pelosi repeated that Democrats had offered to reduce the price of their $3.4 trillion bill by $1 trillion, largely by changing the duration of proposed programs.

But Mnuchin said Democrats had refused to come off their $915 billion request for money for cities and states, a figure he termed “ridiculous.” He said that apart from that issue and a dispute over the appropriate level of unemployment insurance, all other major matters had been resolved. On Sunday, he called for passing legislation on the 70% to 80% of issues for which there was agreement, while pursuing the other issues later.

“We don’t have to get everything done at once, what we should do is get things done for the American public now, come back for another bill afterwards,” Mnuchin said on “Fox News Sunday.”

Pelosi spokesman Drew Hammill denied that there had been agreement reached on most major issues as Mnuchin had said.

Fox News interviewer Chris Wallace pressed Pelosi on her strategy in negotiations, where she held out for many of the Democrats’ demands in hopes the administration would agree, but ultimately they walked away instead and the president acted on his own.

“You’re known as a master negotiator, but didn’t you mess this one up?” Wallace asked.

“Well clearly you don’t have an understanding of what is happening here,” Pelosi replied, criticizing the “weakness of the president’s executive orders, which don’t give the money to an enhanced benefit but put a complicated formula there which will take awhile if at all to accomplish to put money in the pockets of the American people.”