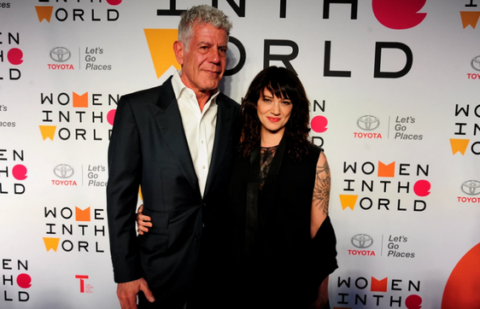 It’s a jarring moment. Just over three years after Bourdain was found dead by suicide at age 61 in a France hotel room by his good friend Eric Ripert, he is returned to us in voiceover. Although now we know he is a uniquely unreliable narrator.

The film’s director, Morgan Neville (“20 Feet From Stardom,” “Won’t You Be My Neighbor?”), eschews Bourdain’s early life and starts in 1999, just before the publication of his groundbreaking best-seller “Kitchen Confidential.” The chef-turned-author’s rise to fame is portrayed as both meteoric and, ultimately, deeply alienating.

“It happened overnight,” Bourdain says in the film. “One minute I was a cook at a restaurant, and not a particularly great one … and the next, I was an author.”

As the book climbed the charts and Bourdain made the talk-show rounds, he greeted his growing notoriety with reticence.

“It’s scary,” he says in another piece of archival footage. “Anything that happens beyond that [kitchen] door, I’m suspicious of.”

“Parts Unknown” producers Lydia Tenaglia and Christopher Collins first worked with Bourdain on an early travel show shortly after the book came out. They remember him initially being extremely awkward in front of the camera on a trip to Japan and Vietnam.

“Tony was actually a very shy human being,” Collins says in the film.

In 2005, Bourdain divorced his first wife, high school sweetheart Nancy Putkoski. Ripert introduced him to restaurant manager Ottavia Busia not long after, and the two married and welcomed a daughter, Ariane, in 2007.

He was thrilled to be a father and initially seemed to revel in having a quieter life as a family man, but the road beckoned and in New York, he was stopped by fans every two minutes on the street.

“Tony got really famous,” David Chang laments in the film, and he and Bourdain are shown commiserating about feeling isolated and distant from old friends. “It was just an incessant, non-stop barrage.”

Other friends and colleagues recall Bourdain saying he was becoming agoraphobic and his life was getting “smaller and smaller” because he couldn’t be out in public.

His marriage to Busia unraveled amid his near-constant travel and they split amicably in 2016, though their divorce was never finalized.

Shortly after, he met Italian film actress/director Asia Argento while filming “Parts Unknown” in Rome. He quickly developed a teenage-like infatuation with Argento, with friends in the film likening it to an addiction and noting that he referred to her as “the crazy Italian actress” and said things would end “very, very badly.”

“There was a very sort of manic nature to what was going on in that last year,” Collins says. “The highs were very, very high, and the lows were very ugly.”

Chang angrily and tearily recalls Bourdain telling him he would never be a good father.

“He was projecting,” says Chang, now a doting parent to 2-year-old Hugo, with another baby on the way. “It broke his heart that he couldn’t be the f–king dad he thought he could be, the romantic version of dad.”

Bourdain let Argento direct “Parts Unknown” in Hong Kong, after regular director Michael Steed fell ill. Veteran crew members bristled at her approach. Bourdain even fired his longtime Emmy-winning cinematographer Zach Zamboni after he clashed with Argento, who is not among those interviewed in the film.

“I just felt like at the end, I wasn’t going to get closer to him by talking to her because she has her own very clear point of view about things,” Neville has said. “She says the same thing in every interview.” (Argento has said that she and Bourdain had an open relationship.) He’s also noted that he wanted the film to be about Bourdain, not just his relationship with Argento, although that shadows much of the final portion.

Days before Bourdain’s death, Argento was photographed with French reporter Hugo Clément. In the doc, Steed recalls checking on Bourdain after the photos hit the papers, and the star mumbling “a little f–king discretion” in reference to Argento being so public with her infidelity.

“My take is that the thing that Tony was having the hardest time with was humiliation,” Neville has said. “He has taken himself so far out on the limb to be made to feel like a chump so publicly. That was the thing — not heartbreak. Humiliation.”

But, while Argento certainly doesn’t come across well in the film, Neville is careful to stop short of blaming her outright for Bourdain’s suicide. Others theorize that Bourdain never overcame the demons beneath the heroin problem of his youth.

Artist and recovering addict Dave Choe notes that he’d never met anyone else like Bourdain, who was supposedly able to quit heroin cold turkey. Bourdain had told him it was something he just worked at, something Choe initially believed before realizing he had traded it for other dependencies, including Argento.

But, “as I got to know him more, I realized it jumped,” Choe says in the film. “The addiction jumped.”

If you or someone you know is struggling with thoughts of suicide, call the National Suicide Prevention Lifeline at 1-800-273-8255.