Harris VS DeSantis Heats UP 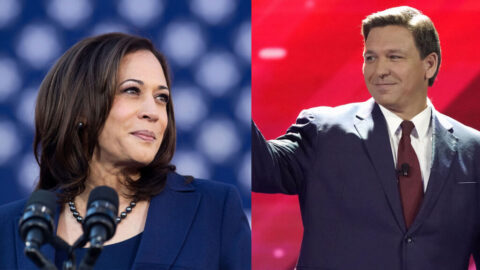 The ofttimes controversial “The View” co-host predicted on a recent broadcast that Vice President Kamala Harris would lose to Republican Florida Gov. Ron DeSantis if she ran to replace President Biden in 2024.

During a discussion on Harris’ unpopularity in polls, McCain argued it was evident she “needed more media training” because of the tactical errors she had made since taking office and that if she was up against DeSantis in the 2024 general election, he would “put her in the ground.”

“I think she stumbled when she was running for president. She dropped out before Iowa. She was a very early dropout. She wasn’t resonating with voters way before President Biden was elected,” McCain said in response to co-host Whoopi Goldberg asking if she thought Harris “stumbled coming out of the gate.”

McCain criticized the media’s tone in how outlets covered Harris’ leadership on the border crisis, specifically calling out the discrepancy in how they approached children being placed in “cages” while in border facilities under former President Trump versus the current administration.

“It was horrific, and now that we aren’t even allowed to send journalists in to film it, and she’s in charge, it’s OK. It’s just a different kind of person in charge of what’s happening on the border,” McCain said, referring to instances in which border facilities housing migrants were closed to the media.

“She’s made a lot of tactical errors, and you don’t have to just take it from me, because I’m obviously a biased actor given that I’m a Republican, but places like Politico and Axios reported how disappointed the White House was on her first foreign trip,” McCain said. “She did [an] interview where she was laughing about the border when she was asked, ‘Are you going to visit the border?’ And she said, ‘I also haven’t been to Europe,’ and laughed very uncomfortably. Her laugh has become a way for people to take hits at her because it’s uncomfortable to watch, and I always thought she needed more media training than she had.”

McCain continued, “The problem for Democrats going into 2024 is if President Biden chooses not to run for reelection, she’s just not going to be a strong enough candidate to run for president.”

Age is a factor for the 78-year-old Biden, who became the oldest president ever elected last year, but there is no indication at this point he won’t seek reelection in 2024.

8 thoughts on “Harris VS DeSantis Heats UP”