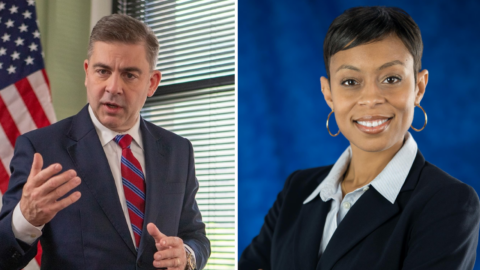 Ohio held two primaries that were viewed by pundits as indicators or bellwethers of things to come.  Maybe so … maybe not.  But they were interesting.

In Ohio’s 11th Congressional District, the battle for the soul of the Democratic Party was being played out.  The so-called establishment candidate was Shontel Brown – a Democrat activist with a long history of political and civic involvement, including as Chair of the Cuyahoga County Democratic Party.  She was the candidate preferred by the Party old guard – people like President Biden, House Speaker Nancy Pelosi and former First Lady Hillary Clinton.  Maybe I should make the “very old guard.”

Those are the folks who are privately terrorized by the increasing influence of the faction of the Party headed by Vermont Senator Bernie Sanders.  It is composed of the members of “the Squad” and several less vociferous fellow travelers.

Publicly, the less radial Democrats put on a happy face of political harmony.  To some extent, the establishment has attempted to placate the wild bunch by embracing a few of their radical policies.  Biden’s move to the left is clear evidence that the radicals have gained significant influence.  But they are not satisfied.  They want much more.  But behind the scenes, the establishment Democrats fear that the radical left agenda will cost the Party in future elections.

The ambitions of the Democrats’ radical left were found in the candidacy of Nina Turner, a barnstorming radical activist of the first order.  She had the full-throated support of Sanders and members of the Squad.

When the results were in, Brown came out ahead  – albeit not overwhelmingly – in a 50 to 45 percent victory.  This could be a sign of the obvious.  The American people – including most Democrats – are put off by the tactics and policies of the far left.  This may well mean that in 2022, those Democrat members of Congress who leaned too far left – or acquiesced to the left a bit too much – will face an uphill campaign to win re-election.

Even a few loses will hand the speaker’s gavel in the House to the Republicans.

In many ways, the race in Ohio’s 15th Congressional District was a mini version of the 2016 Presidential Election.  There was one Trump-endorsed candidate against a large field of other Republican contenders.  In such a situation, one candidate only needs enough votes to win a plurality.  That is what Trump did in the early 2016 primaries — and that is what his endorsed candidate, former lobbyist Mike Carey, did in Ohio.

Carey won with approximately one-third of the vote – or 37 percent.  That means almost two-thirds of the Republican voters preferred someone else.  It is a victory, but not a mandate.  That plurality worked because Carey’s three most formidable contenders each took 13 percent of the vote.

While most political pundits will mark this up as a win for Trump, he has the same statistical reality – two-thirds of the voters of the 15th District preferred one of the candidates Trump did not endorse.

But it is not just about Trump.  Carey may have been endorsed by Trump – and he may share many of the same values and policies as Trump – but he is not Trump.  He proved to be a solid campaigner without all the negative personality issues.  He may well have garnered most of those votes even without a Trump endorsement.  He still may have won.  It would be a mistake to assume that every vote Carey received was a dyed-in-the-wool Trump supporter.

In terms of the balance of power in the Congress, the two Ohio primaries represent the status quo. Brown and Carey are both expected to win their respective elections.  Both will be taking the place of a former congressman who was a lot like them.