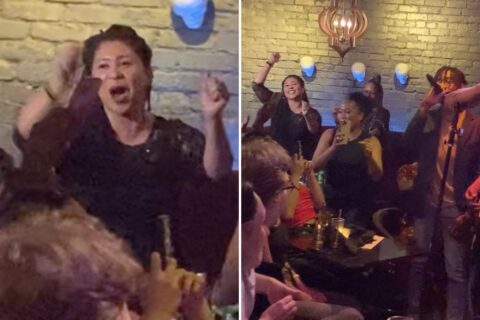 But the mayor remains defiant and attempted to justify her actions while also decrying the “fun police” who would dare to attempt to keep her accountable.

Though Breed’s own rules say masks are required indoors for all patrons — vaccinated or not — except when eating or drinking, photos and video show the mayor maskless while dancing and singing and no food or drinks in hand.

She attempted to tell the San Francisco Chronicle shortly after the scandal broke that she gets tested often and that every person at the event had to show proof of vaccination; however, such proof is irrelevant considering the mask rules apply to everyone regardless of vax status.

What is she saying now?

In an interview with KPIX-TV, the mayor did her best to do damage control and justify her mask violations — as well as go after the “fun police” who were harshing her mellow.

“I think it’s sad that this is even a story,” the mayor began.

She went on to say that people were ignoring the “monumental” nature of the gathering she was attending when she was openly violating her own mask rules: The original members of the Oakland R&B group Tony! Toni! Toné! who had not preformed together in public in more than 20 years had finally come together for a live performance.

“The fact that that is getting lost here is very unfortunate,” Breed said, noting other musicians who performed.

“I was there. I was eating, and I was drinking,” she said, while trying to explain her behavior. “And I was sitting with my friends.”

She repeatedly emphasized to reporters that “everyone there was vaccinated” — which is immaterial to the situation, according to her own mandate.

“And yes,” Breed went on, “in the time while we were drinking — like everyone else there — we were all having a good time. And again, all vaccinated.”

“This is now a distraction,” she lamented.

“We don’t need the fun police to come in and try and micromanage and tell us what we should or shouldn’t be doing,” Breed said.

Pressed on the video of her dancing and singing maskless, the mayor claimed, “My drink was sitting at the table. I got up and started dancing because I was feeling the spirit, and I wasn’t thinking about a mask. I was thinking about having a good time.”